It was so awesome!! She's the nicest person EVER. And I could feel how powerful she was.. it was quite intimidating.

However.. her books were being sold in our other building (where she was giving the talk).. so I went over there after her presentation was over.. and just as I'm getting in line to buy the book (which was pre-autographed), a door opens and out comes Suze herself, about to walk right in front of me.

In a panic, I grab her arm quickly (but as gently as I can) and ask her if she can sign my book (another book that I had that inspired me to be smart financially). And she happily obliges until I realize I have no pen!! I ask anyone and everyone for a pen and she even had to follow me to the front desk to ask our receptionist for one.. and she signs my book and I was lucky enough to have my picture SORTA taken with her.. (someone was just taking random pictures)

Too bad its kinda dark.. I haven't had time to edit the lighting in Photoshop.. but AHH! hopefully she has passed her Money Magic Powers to me!! 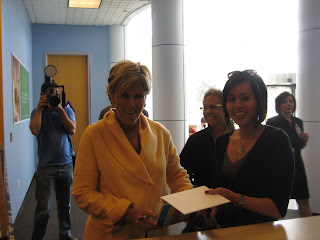 On a whole other note.. I had my First Final yesterday.. I'll be officially done with the semester on Saturday. Last night's final though was such a joke. I mean.. My professor is already ALWAYS unorganized, but damn, he gave me a final that was missing a page.. and then replaced it with someone else's answers!! It was distracting me and making me second guess my answer choices.. but whatev. On to Chemistry!!
Posted by Maritess at 7:36 AM